A couple on their honeymoon is making a documentary about love around the world. For Valentine’s Day, they sit down for an interview with CoupleCo: Working With Your Spouse For Fun & Profit 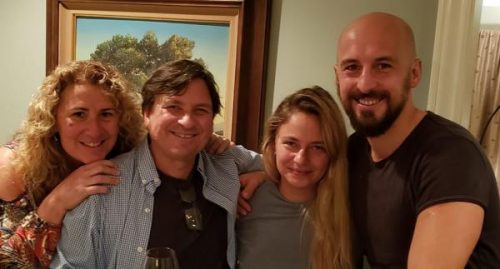 Is a year-long honeymoon a good thing—but can it turn into a year-long business trip? If you spend it traveling the world, making a documentary about Love Around The World, the answer might be: yes. And is that a good thing?

These are the kinds of things that Honey and Blaine Parker ask. Their show, CoupleCo: Working With Your Spouse For Fun & Profit, has a special two-part, Valentine’s Day episode. In episode #108, they’re talking with Angie and Davor Rostuhar, a pair of amiable Croatians who’ve been on that year-long honeymoon, making that documentary.

The subject is love, but this is definitely not a Hallmark movie. The Rostuhars are looking at love along a spectrum. From traditional first-world, heterosexual relationships, to tribal relationships in Africa and the Amazon, to the forbidden love of same-sex couples in the Middle East, this is love, warts and all.

Yakuza for Christ? Really? When asked what relationships have surprised them the most, one story they mention bridges organized crime and organized religion. Think: a woman waits for a mobster because she knows he’ll eventually embrace Jesus. But really, many of their stories are unusual, and blissful relationships come from unlikely places.

As couple entrepreneurs, Angie and Davor have had to work on a business and personal relationship new to both of them. Finding their respective roles in this business took work. Though, Davor Rostuhar is both a strong-willed and thoughtful man who gave this effort a lot of introspection. Before taking on this year-long project, he had plenty of time to think about it. He was busy with a solo expedition, hauling a sled across Antarctica by himself.

The episode, “Producing Love Around The World: Angie & Davor Rostuhar, Filmmakers, Part 1” is available at Apple Podcasts, Google Podcasts, and as a direct download, with all links available at the CoupleCo website. Part 2 of the conversation goes live next Wednesday, February 19, 2020.