The new Boycott platform offends conservatives by using a controversial logo in an effort to find common ground between the left and right wing. Did it work? 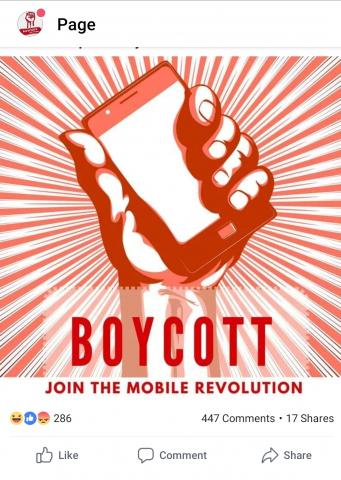 The founder of a new social action platform, Boycott, believes everyone gets offended sometimes. In today’s political climate, conservatives have been the leading voice against the “easily offended” left. But is it only liberals that get offended? The Boycott team decided to conduct a test and find out.

As an example, over the years, the political left media in America has been vocal about the offensive nature of the Confederate Flag. Many right-wing conservative outlets have pushed back by calling liberals “snowflakes” that want to erase history. They hold the position that the confederate flag is not intended to be offensive but a symbol for states rights and a recognition of their southern ancestors that fought in the war.

This position being true is debatable but this is not the major concern. The question it raised for the Boycott team is, “Should the intention stated matter more than the perception that caused the offense?”

On June 3, 2019, the Boycott team posted their logo on Facebook and targeted conservatives in their advertising. The logo uses the raised fist of solidarity, support, unity, strength, and resistance clenching a mobile phone. This symbolizes Boycott’s commitment to bringing people together to voice their concerns in a way that leads to action.

The raised clenched fist has been attached to many movements throughout history but despite the stated intention, it seems the Boycott logo was immediately associated with Communism and Socialism. The post received over 400 comments and the majority were quite revealing:

“Why do you use communist symbols? This should change now!”

“This app is for dirty communists. F*** these guys!”

“It’s all about socialism/communism!”

“I bet this is Leftist Fascism once again.”

“F you and your ad Commies!”

This went on continuously despite the many posts and comments clarifying what the Boycott App is actually about. Many conservatives were offended by the logo because at one point in history a raised fist was used as a symbol for the communist movement.

In the same way, people of color are offended by the Confederate flag because at one point in history they were tormented, tortured and killed by people waving the flag.

While Conservatives were the target in this case, Liberals are not in the clear either. When Colin Kaepernick knelt, many people on the right were offended despite the stated intention. When the offended felt ignored, they responded by ignoring the actual purpose of the kneeling. This vicious cycle continues and division prevails. It is visible across many issues. The Boycott team is fighting to break this cycle.

When asked how, Boycott’s founder, responded, “The new way of Boycotting will have to be focused on raising concerns, clarifying intentions and starting meaningful conversations that lead to positive change. Yelling, screaming & name-calling doesn’t seem to be effective. When the Boycott app is used the right way, you will see a revolution rooted in unity, understanding and love.”

Boycott conducted this experiment as a neutral platform in order to discover answers to questions that could reveal common ground between opposing sides.

More details on the Boycott App are available on their Kickstarter project page here: